On the 9th and 10th of April, Jacopo Pompilii and I run a workshop in Emanuela Bonini Lessing and Francesco Franchi’s Contemporary Publishing studio at Iuav University of Venice. Since we wanted to work on the limitations and opportunities of EPUB format, we prepared a 2-days session entitled “The Mobile is the Massage – EPUB as an Inventory of Effects.” Here’s the abstract:

The Medium is the Massage, written by Marshall McLuhan, designed by Quentin Fiore, and produced by Jerome Agel in 1967 is a milestone. Highly influenced by the kaleidoscopic effects of television, it helped to popularize McLuhanism, an irresistible mix of theories around media and messianic claims about the developments of society at large. We’ll attempt to translate this “cinematic paperback” into an ebook in EPUB format, a widespread free and open standard for digital books. For pragmatic reasons (not everyone owns a dedicated ereader), the smartphone will be our privileged reading device. Given both the potential of the EPUB and its limitations, the translation process won’t be neutral. Instead, we’ll need to actively interpret the peculiar graphic solutions employed by McLuhan and Fiore in this self-reflexive paperback. 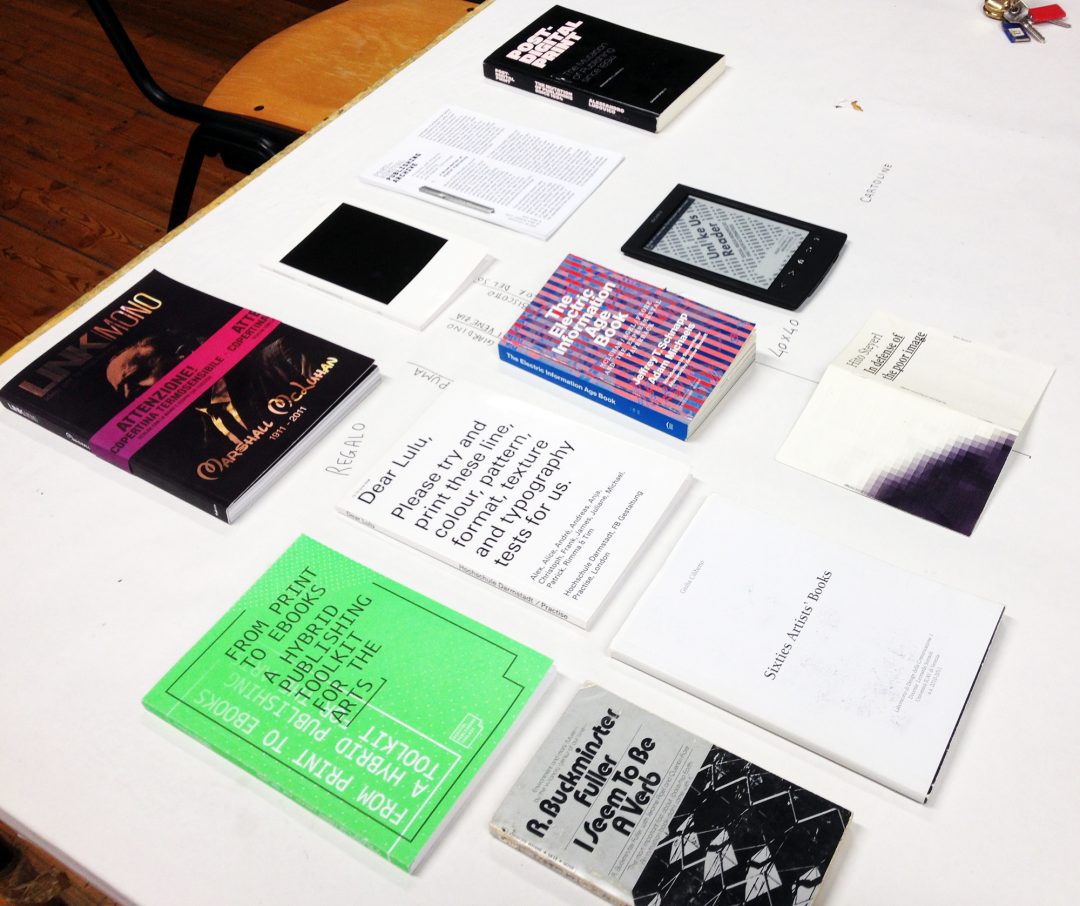 The workshop was anticipated by two presentations introducing the topic and our personal perspectives on it. Jacopo presented a comprehensive overview of the current ways of producing, publishing, and circulating content, starting from the origin of ebooks and concluding with growing blogging platforms like Medium. Here’s his abstract:

The term ‘ebook’ is often linked to relatively recent devices such as the iPad or the Kindle. Its origins are actually far more distant: over time, several ebook formats have appeared, each with its own features and intents which imply diverse ways of creating and publishing content. A comprehensive overview of these will be shown in order to make visual designers more aware of the available opportunities.

I took the opportunity to articulate the differences between what I define ‘rich’ and ‘poor’ media in digital publishing, during a talk titled “In Defense of Poor Media”. The full transcript is available here and the abstract follows:

This talk pays homage to “In Defense of the Poor Image”, an essay in which German artist and writer Hito Steyerl (2009) speaks of the kind of “charge” that the poor image – an image that “has been uploaded, downloaded, shared, reformatted, and reedited” – acquires while circulating through networks. I argue that, in the field of digital publishing, poor media are able to “transform quality into accessibility,” like the poor image does. Poor media substantiate the book’s potential for duplication and dissemination. Conversely, rich media are the product of a commercial doctrine based on an ornamental understanding of digital technology, a Hollywoodian rhetoric of engagement, and a reactionary conception of the publishing process.

At this point, we gave an introductory presentation about HTML, CSS, the EPUB format, and library management application Calibre. Because of the limited time, we couldn’t be exhaustive on these topics. Therefore we tried to squeeze the minimum knowledge required to tinker with EPUB files. In order to avoid bottlenecks, we prepared an EPUB template based on this EPUB 3 Boilerplate containing examples of HTML and CSS (headers, paragraphs, css transitions and animations, etc.) inside of an EPUB-ready structure. The template can be downloaded here.

In brief, the goal of the workshop was to translate the The Medium is the Massage by McLuhan and Fiore to an EPUB ebook meant to be read on a mobile. Before starting, we emphasized the role of subjective interpretation that happens when one extrapolates some content from some medium and frames it into a different one. As an example, we showed the ASCII version of Flatland’s frontispiece found in Project Gutenberg library and the EPUB version of Boem Paukenslag by Megan Hoogenboom (2010), where a 1920’s concrete poem becomes an ebook.

We asked the participants to choose three consecutive spreads from The Medium is the Massage and to provide for each one:

We suggested them to consider three specific contexts:

In addition to the EPUB template, participants were given a PDF version of The Medium is the Massage from which quickly extract the content. Finally, we warned the participants that many of the ideas they would have could not work because of the different behaviors of EPUB reader apps (e.g. iBooks doesn’t render animated gifs). To us, failed experiments weren’t a problem since the workshop was supposed to be an opportunity to understand the practical limitations of the EPUB publishing ecosystem in its current state.

At the beginning, most of the ideas were revolving around animating the elements in the page, particularly the images (e.g. make an eye blink). Some other ideas incorporated some complex level of interaction not so easy to develop. In order to overcome both literal and convoluted interpretations, we tried to look more closely at not just the elements on the page but the way these are related. We asked ourselves such questions as “why is this word so big?” or “how do these two images talk to each other?”

After a quick prototyping session, we started to notice the huge differences between the various reading applications. Some of them could render animated gifs, some other had a page-flip effect, some others didn’t show css transitions. Sadly, our template didn’t work at all in Google Play.

The most relevant constraint that affected the translation was probably the shift from spread to single page. The effects of this can be seen for instance in the conversion made by Federica Bortolussi, Edoardo Ceron, and Francesca Rossetto. In McLuhan and Fiore’s version there is the horizontally-stretched picture of a woman. In the EPUB version, the image is stretched vertically and therefore it naturally follows the flow of the scroll. Thee group also interpreted McLuhan’s thoughts on perspective by producing a series of close-ups of a Renaissance painting. 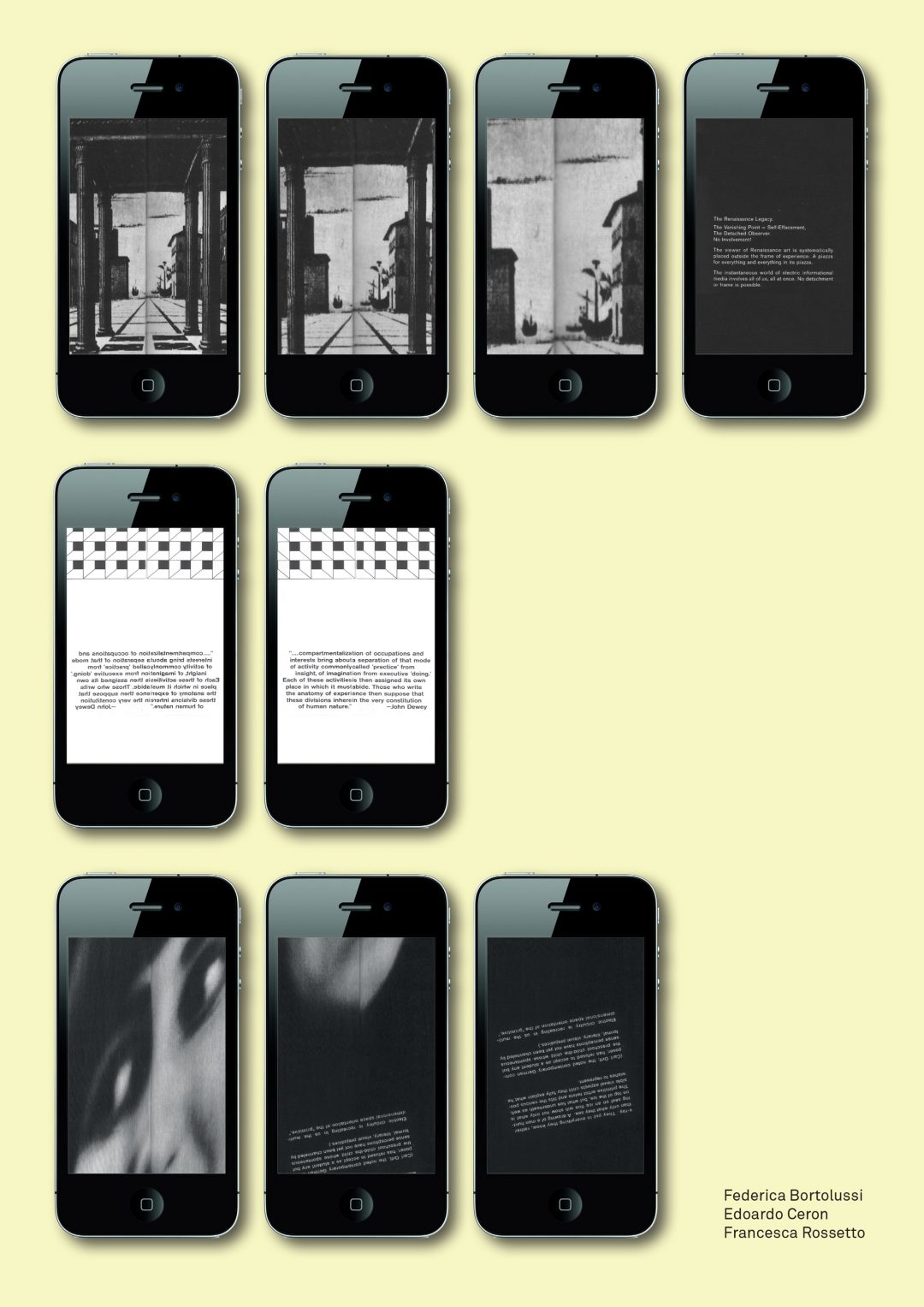 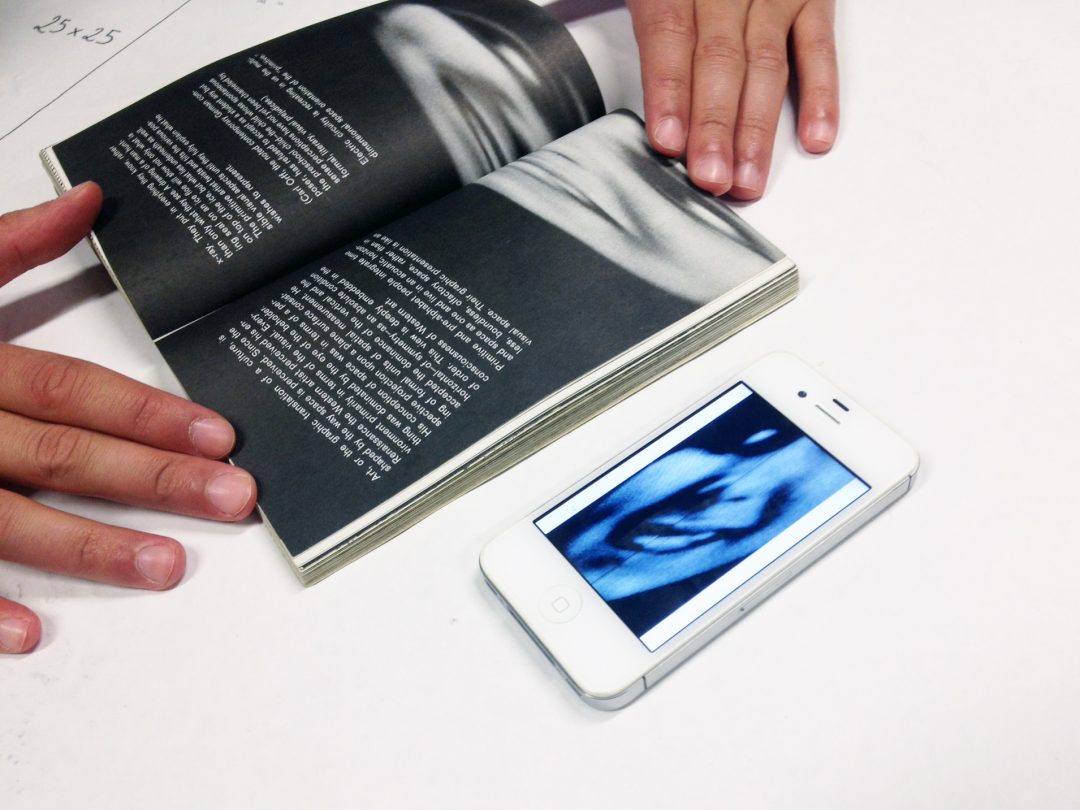 Manuel Bortoletti, Marta Signori, and Daniela Bracco animated the reversed zooming effect originally present in the physical book (you, your family, your neighborhood). While doing so, they also played with user interaction: the fingerprint, which occupied a full page in the original version, acquires now a 1-to–1 scale on the mobile and becomes a clickable element. Surprisingly, CSS3 animations and Javascript code worked like a charm (at least on Marvin). 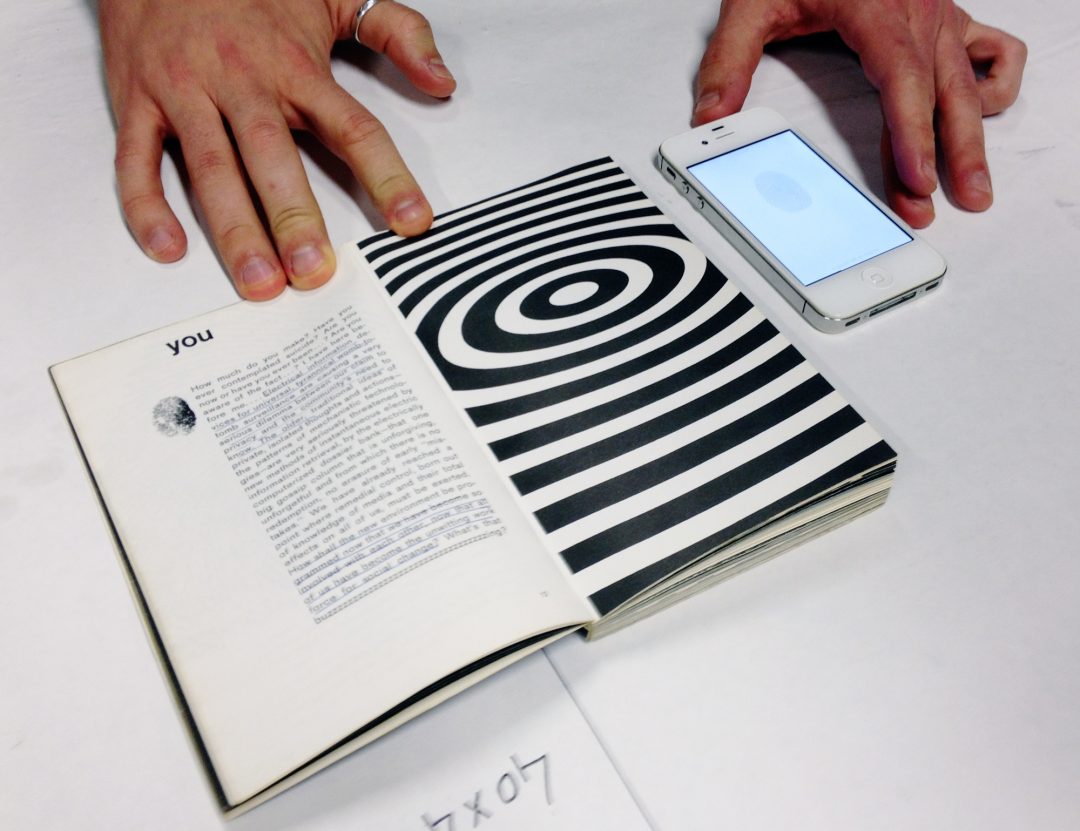 In other cases the relationship between text and image was radically altered. The group consisting of Michela Di Cristina, Maria D’Uonno, and Erica Zipoli decided to use pictures as background for the scrolling text. This was inspired by the fact that one of these suggested an idea of movement: several people entering into a giant woman sculpture. 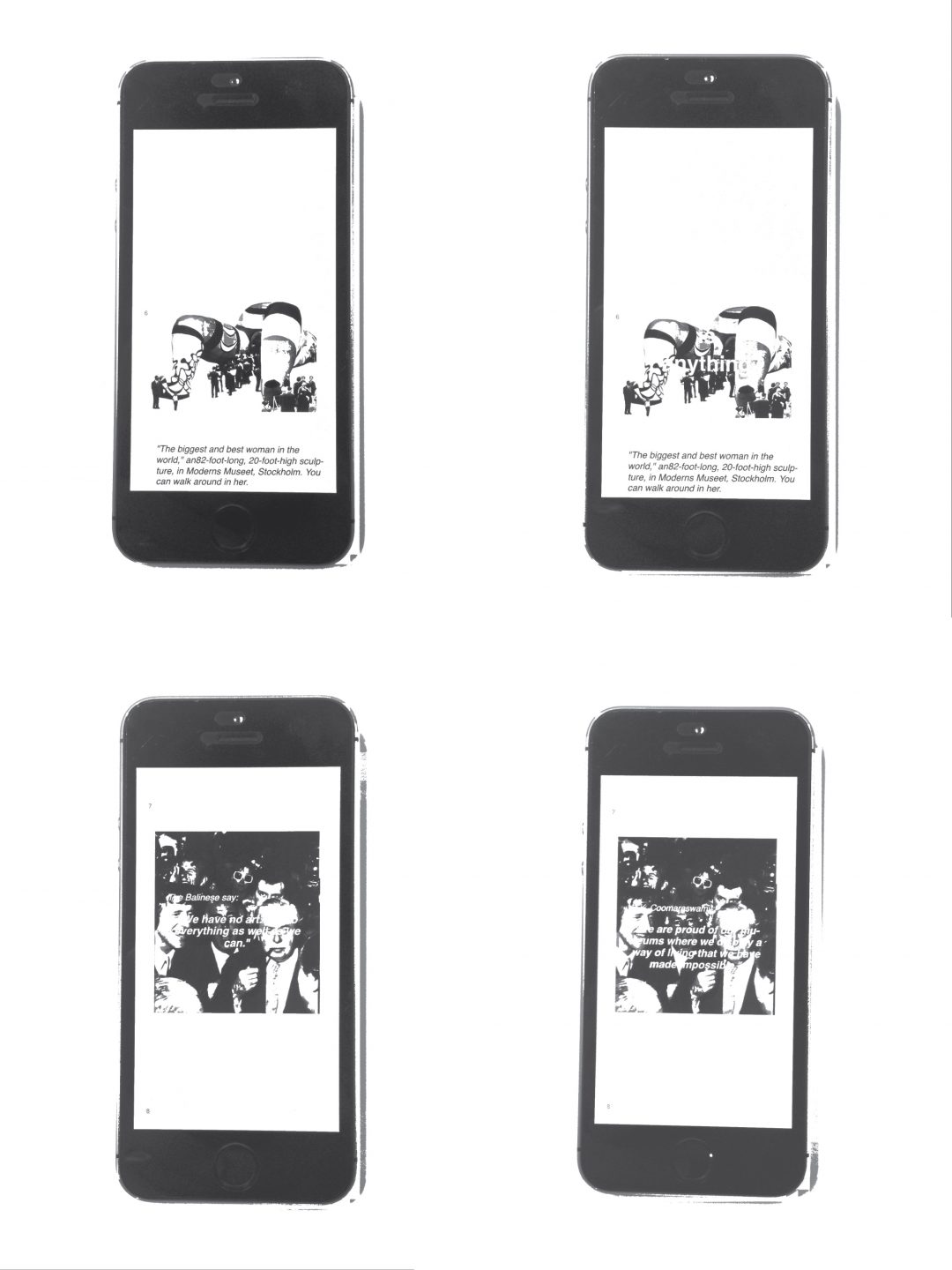 Fiore’s cinematic approach to layout was also an inspiration. Elisa Cianferoni, Riccardo Gioria, and Timi Gjika decided to increase the paradoxical effect of one picture by splitting it and showing it in two different pages. In the first one, the reader sees a business man seemingly running through the city. In the latter, the reader realizes that he’s actually surfing. 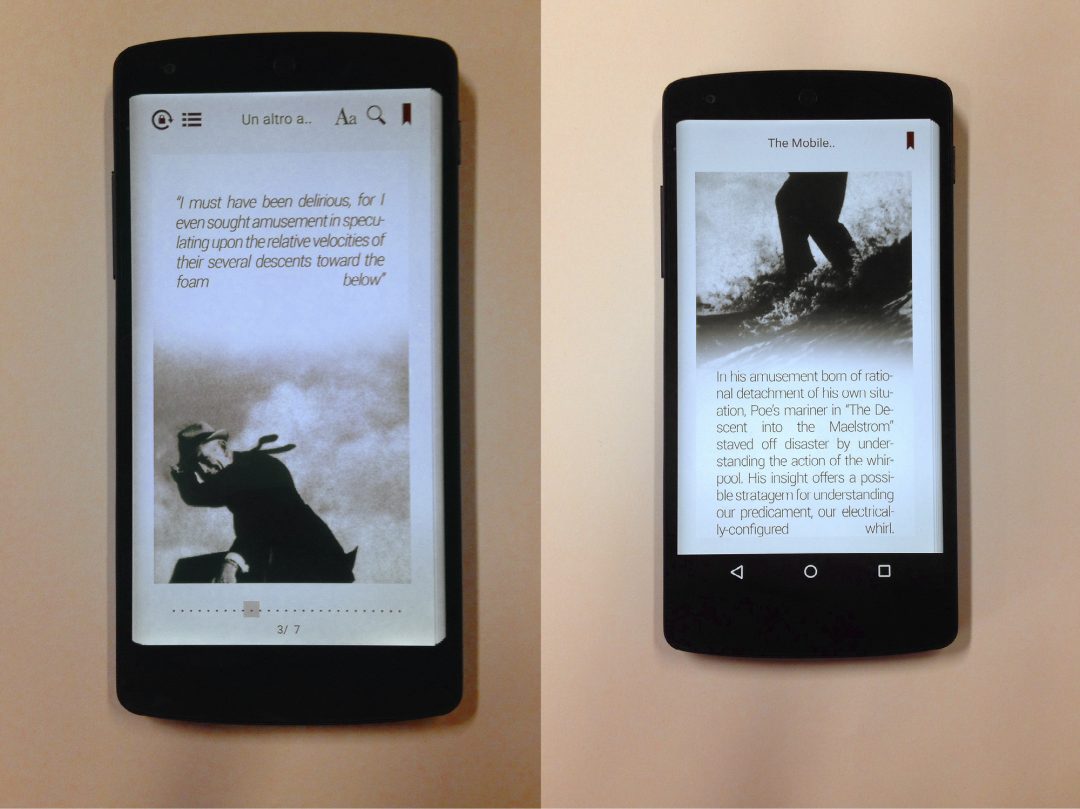 The same group worked on a spread on identity, transforming a static image into an interactive experience. In the original spread the sentence “and who are you?” floats over a group of silhouettes. In the new version these silhouettes become clickable elements that make appear new possible selves.

In the translation by Arianna Codromaz, Damiano Gaudenzi, Andrea Fasolo Rao, and Franziska Steingen, the picture of a scribe’s hand is vertically rotated and set as the background of a text to be scrolled. In this way, the hand seems to suggest the scrolling act itself. In their new version the repetition effect of the sentence “printing, a ditto device” is radicalized: the phrase, overly multiplied, produces an infinite scroll effect and contains a message that become hidden in this repetitive gesture. By hacking the iBooks render engine, the group was also able to obtain two navigation orientations within the same ebook. Finally, they redesigned the cover: the simple inversion of colors plays well with the retro-illuminated screen of a mobile.

Nello Alfonso Marotta, Andrea Marson, and Anna Nogaré focused on the way eyes wander through the page and transformed a cartoon depicting a dialogue taken from Alice in Wonderland into a series of “camera shots,” producing in this way a cinematic text. They accentuated the horizontal navigation mode by placing a measurement bar on the middle of the page. Finally, they emphasized the sentence “…as we begin, so shall go” by altering its relationship with a picture of submarines (or airplanes?).

Valentina Ercolani, Marta Pederiva, and Xiaodan Zhang played with the concept of the invisibility of environments. While this is expressed through an almost empty spread of the physical book, they decided to make a concrete use of the word ‘environment,’ which builds an invisible but perceptible frame. They also exploited the border of the screen in order to replicate the surprise effect of an image of a city that seems located in the ancient Greece, but it’s actually a modern replica. 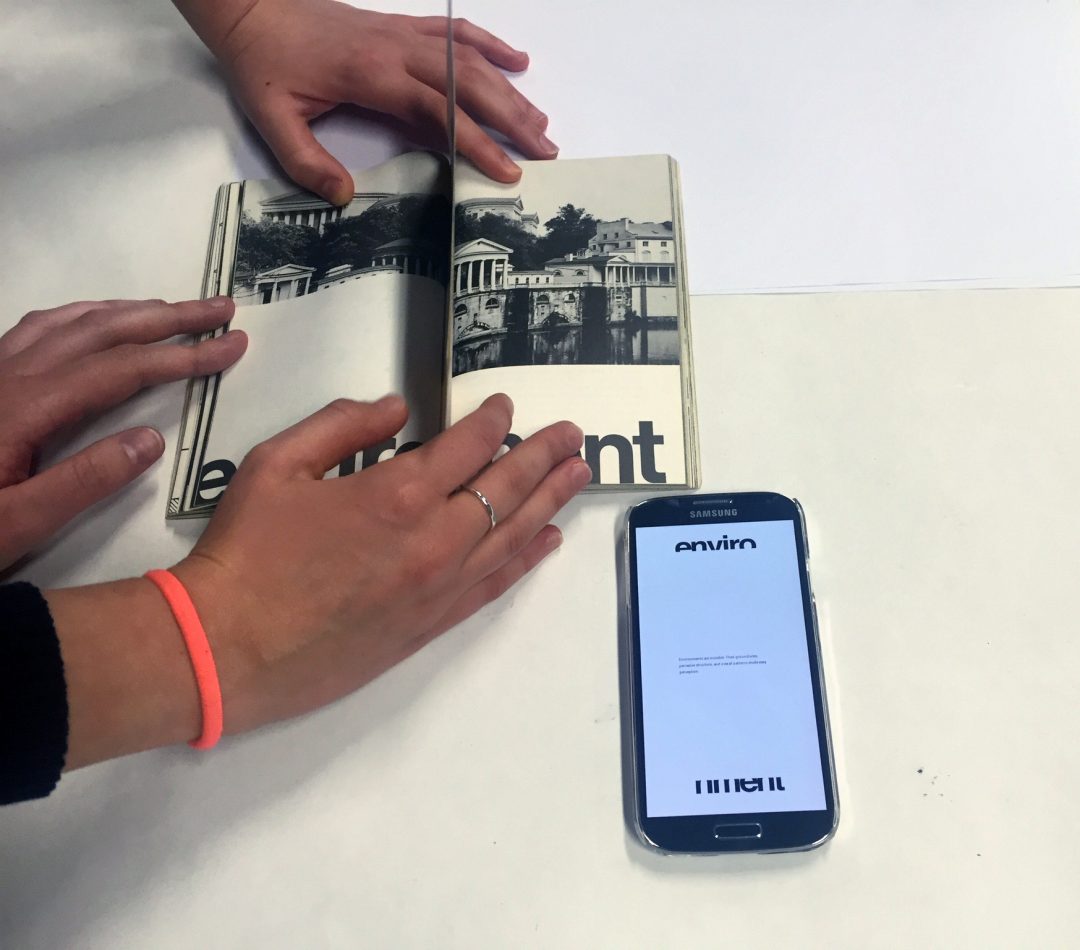 Here I’d like to list a few thoughts emerged during the workshop. First of all, we realized that Calibre’s “Edit Book” function is a great tool for quickly prototyping ideas as EPUB files, thanks to its advanced WYSIWYG editor with syntax highlight and the possibility to directly replace images and other files.

The development of a respectful but meaningful translation of the Medium is the Massage for mobile phones led us to a deep and somehow original reading of the book, focused on the design-strategies employed – one might say the effects the authors speak about, and their results. In this sense, EPUB conversion can be seen as a sort of pragmatic exegesis, a peculiar modality for reading books.

We suggested the participants to directly scan the mobile phone to document their EPUB version but we soon realized this wasn’t working: scanning the mobile was cumbersome and the physical interaction with the device was lost. Probably a quick and easy solution would have been using Vine (we keep this idea for the next iteration of the workshop).

Some participants blamed EPUB for its limitation. I honestly understand the frustration but I think that the problem is not in the standard itself but in the fact that there is no such thing as a standardized way to render EPUBs. This means that many of the hacks developed are app-specific. As I explained in my defense of the poor media, I believe there is something valuable about it: “A key concept of EPUB is that content presentation should adapt to the User rather than the User having to adapt to a particular presentation of content”.

Jacopo and I would like to thank Emanuela Bonini Lessing and Tommaso Gentile for the warm hospitality, all the participants for their energy and enthusiasm, and André Castro for his precious advises (don’t miss the collection of materials related to his own EPUB workshop).