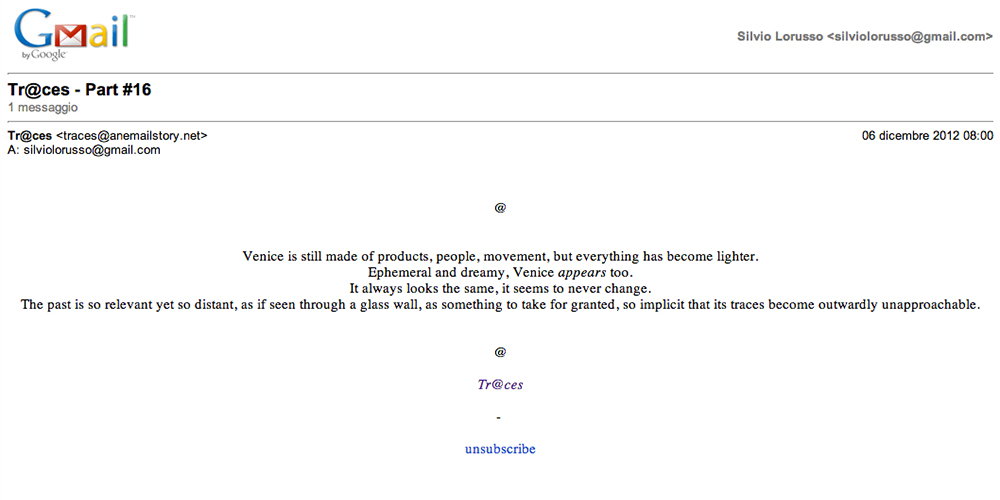 «Whoever plays a main role will always keep a trace of it» (Fernand Braudel, Venise, 1984)

Tr@ces is a multi-stratified tale that links together apparently distant subjects and underlines unexpected connections between them. Three narrative layers overlap and come one after the other, raising a common issue: the denial of the past, the loss of traces, the rise in lightness which seem to affect contemporary commercial systems and practices.

The tale begins reflecting on the supermarket context, where products coming from all over the world seem to appear from nowhere without bearing any trace of their actual provenance. This dematerialized condition is compared to that of commercial at, the universally known email symbol [@], whose original commercial meanings have been neglected in the name of the lightest, cleanest, fastest mean of communication. The city of Venice, in turn, seem to have undergone a similar sublimation process since much of its current economy is grounded on the market of souvenirs, providing a lightened and simplified version of the city’s past in order to increase its present saleability.

Interlacing commercial at‘s past significances, a “commercial paradigm” is finally outlined and used as a lens through which reveal several traces of both supermarket products’ provenance and Venice’s former trade power.